This one was hard to take.

Amid the many coronavirus- related blackouts on the classical music calendar this month, the Philharmonia Baroque Orchestra’s announcement that it was cancelling its production of “Scylla et Glaucus” evoked a particular sense of loss.

Based on a story of gods and nymphs, sorcerers and demons from Ovid’s “Metamorphoses,” Jean-Marie Leclair’s opera was first performed in Paris in 1746. It was scheduled for a rare, fully staged production April 15-19 at the Herbst Theatre in San Francisco, with music director Nicholas McGegan leading the orchestra, Bruce Lamott’s Philharmonia Chorale, and a large company of singers, dancers and actors from France’s Centre de Musique Baroque de Versailles. Directed and choreographed by Catherine Turocy, the production was scheduled to travel to France following these performances.

Like Philharmonia’s earlier coproduction of Rameau’s “Le Temple de la Gloire” (The Temple of Glory) with this remarkable French ensemble, performed and recorded at Zellerbach Hall in 2017 in conjunction with Cal Performances, Leclair’s opera promised a thrilling revival of a seldom-staged work.

It was also intended to be McGegan’s final appearance as Philharmonia Baroque’s music director. The conductor announced earlier this season that he was stepping down, and with “Scylla et Glaucus” off the calendar, his official tenure with the San Francisco-based organization has ended.

But McGegan leaves an indelible stamp on the Bay Area music scene. In performances, recordings and special events, he took Bay Area audiences on a vibrant exploration of the Baroque era, introducing Handel operas and oratorios to audiences whose only previous exposure to the composer consisted of the “Hallelujah” chorus from the “Messiah.” When McGegan was conducting, old notions about early music being stuffy or boring flew out the window.

This season alone, he conducted Handel’s dramatic “Judas Maccabaeus,” with tenor Nicholas Phan in the title role, followed by the composer’s “Aci, Galatea, e Polifemo” — the latter in a breathtaking January production staged by Christopher Alden and starring soprano Lauren Snouffer, countertenor Anthony Roth Costanzo and bass-baritone Davóne Tines. Anyone who witnessed a performance of “Aci” at ODC Theater will never think of Handel the same way again.

Although he’s undoubtedly one of the world’s great Handel conductors — his international appearances have included stops at Carnegie Hall, the London Proms, the Amsterdam Concertgebouw, and the International Handel Festival in Gottingen — McGegan also took Bay Area music lovers on a wide survey of Baroque, classical and Romantic works.

Audiences will remember his tenure as one of exploration, pushing the notion of an early music orchestra well into the 21st century. He collaborated with choreographer Mark Morris on full-scale productions such as Rameau’s “Platee,” and conducted premieres by contemporary composers Jake Heggie, Sally Beamish and Pulitzer Prize-winning composer Caroline Shaw; this season’s world premiere of Shaw’s oratorio, “The Listeners,” recorded for future release, was simply phenomenal.

Conductors like McGegan attract top artists, and the Bay Area saw dozens of them during his directorship. Pianist Emanuel Ax, sopranos Dominique Labelle, Avery Amereau and Sherezade Panthaki, mezzo-sopranos Lorraine Hunt Lieberson, Susan Graham and Anne Sofie von Otter, and countertenor Aryeh Nussbaum Cohen are just a few of those who appeared with the orchestra.

Along the way, McGegan forged an orchestral sound that is unlike any other among early music bands — tightly knit, responsive and a little scrappy. Longtime Philharmonia players include violinists Elizabeth Blumenstock and Katherine Kyme, cellists Phoebe Carrai and Tanya Tomkins, oboist Gonzalo X. Ruiz, flutist Stephen Schultz and the unequaled mistress of the harpsichord, Hanneke van Proosdij. Those artists, we hope, will continue to make music under incoming music director Richard Egarr, who will succeed McGegan in the post this fall.

Music lovers can enjoy the orchestra’s recordings. Led by McGegan, they’re well worth having. Available on Philharmonia’s label, there’s a lot to choose from on the organization’s website, www.philharmonia.org.

While you’re there, check out these releases:

• And be sure to stream a video of McGegan in one of the orchestra’s PBO Sessions. As always, he’s brilliant. 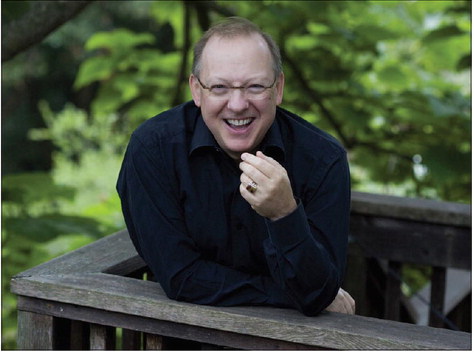 Nicholas McGegan’s final performances as music director of the Philharmonia Baroque Orchestra, set for April in San Francisco, have been canceled due to the coronavirus pandemic.

Click here to see this page in the eEdition: 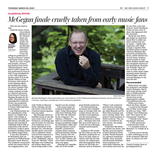