Every year, 7 trillion tiny pieces of plastic, roughly equal to 1 million pieces each for every man, woman and child in the Bay Area, flow into San Francisco Bay, according to a the most comprehensive scientific study yet on the subject.

The three-year study found that billions of pieces of “microplastic” — particles smaller than 5 millimeters each, or roughly the size of a pencil eraser— pour through the Bay Area’s 40 sewage treatment plants every year. The particles come from synthetic fibers in clothing, like fleece jackets that shed in washing machines or baby wipes flushed down toilets, and then wash down sewer pipes, pass through treatment plant filters and empty into bay waters.

But 300 times more of the relentless toxic confetti, the study revealed, comes from storm drains, the largest source of the particles. The drains collect plastic litter from roads, foam food packaging, rubber bits from car tires, and other sources and deliver the debris to creeks and the bay, especially during wet winter months, where it breaks down but never fully disappears. “These are pieces smaller than a kernel of popcorn,” said Rebecca Sutton, lead author of the study and a senior scientist at the San Francisco Estuary Institute, a nonprofit research center in Richmond. “Many of them are too small to even see. You have to use a microscope. They are tiny little particles and tiny little fibers.”

The study was conducted 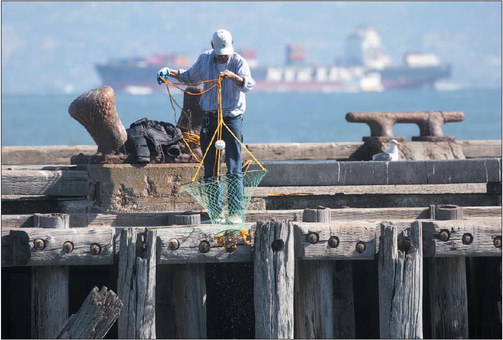 A crab fisherman checks his trap while fishing off of Torpedo Wharf inside the Golden Gate in San Francisco on Monday. A threeyear scientific study found trillions of “microplastic” pieces are flowing into San Francisco Bay, threatening the ecosystem.

by researchers at the San Francisco Estuary Institute, UC Davis, the University of Toronto and other institutions and released today.

California has done more than most other states to reduce plastic pollution. The state has banned plastic grocery bags and prohibited plastic “microbeads” in toothpaste and cosmetics, and numerous cities have limited foam packaging in restaurants.

But the Bay Area has a dense population around its bay shore. And the bay’s narrow opening at the Golden Gate limits tidal action and natural flushing to the ocean. So San Francisco Bay has a higher concentration of micro-plastic pollution than many other large bodies of water around the world, the study found.

“It’s one of these things that has kind of crept up on us,” said Jared Blumenfeld, secretary of California’s Environmental Protection Agency. “Most of us didn’t see this coming five years ago.”

To be sure, the science of micro-plastics is still in its infancy. There have not been direct connections made between tiny bits of plastic piling up in the environment and adverse impacts on the health of Bay Area residents.

But the new study found that all those tiny particles are building up in small bay fish, like anchovies. Species at the lower end of the food chain are eaten by larger animals, including big fish, birds, sea lions and some people. And sometimes, people ingest the plastic particles from drinking water.

Blumenfeld noted a study in January from the University of Newcastle in Australia, which found that the average person in the world ingests 5 grams of plastic every week, about the same amount as in a credit card.

“We are just at the beginning of understanding what this means for us,” Blumenfeld said. “But generally if someone asks you if you want to ingest 5 grams of plastic a week, most people would say no.”

There are multiple ways to reduce the pollution, experts say.

First, filters can be put on washing machines that capture many of the synthetic microfibers. They cost manufacturers about $7 each to install, Blumenfeld noted.

“The technology exists. It’s only a matter of time,” he said. “Someone will mandate them, I’m sure.”

Second, former Gov. Jerry Brown signed laws last year requiring the state Ocean Protection Council to come up with a strategy for reducing micro-plastics, and requiring the State Water Resources Control Board to adopt methods to measure them and inform the public about their levels in drinking water by 2021.

Two landmark bills this year would have required food and beverage companies selling products in California to cut singleuse plastic packaging 75% by 2030, by setting up recycling programs, using compostable plastic and reducing packaging. But facing opposition from the recycling industry, the bills failed to come up for a final vote when the Legislature ended for the year. The legislation will be back in January.

“There’s a lot of interest in the governor’s office and the Capitol in general to get comprehensive reform for how we deal with single-use packaging,” Blumenfeld said. “The odds for something significant happening on that are good.”

In the Bay Area, state regulators required 80 cities to reduce the amount of trash flowing into the bay by 80% from 2009 levels as of July 1 this year. Most are on pace to met that goal, said Michael Montgomery, executive officer of the San Francisco Bay Regional Water Quality Control Board.

Cities have increased street sweeping, put trash capture devices in storm drains and taken other steps, he noted. But major upgrades to sewage treatment plants and storm drain systems can cost billions of dollars, which are often funded by residents’ sewer or property tax bills.

“The better we understand the sources of these micro-plastics and their toxicity, the more informed the remedies can be,” Montgomery said. “We want to know which actions will have the biggest bang for the buck.”

Environmentalists say more should be done. The trash rules are a good start, they say, but allow cities to estimate how much they have reduced their trash, and need more oversight and enforcement, said Sejal Choksi-Chugh, executive director of San Francisco Baykeeper, a conservation group. “It’s kind of check-thebox, pat-yourself-on-theback kind of thing,” she said. “If you go to the shoreline in places like Berkeley or Oakland, every Coastal Cleanup Day volunteers clean up tons of trash. And it doesn’t look like there’s any less now than there was 10 years ago.”

As part of the new study, scientists from the San Francisco Estuary Institute, working with 5 Gyres Institute, a nonprofit group based in Los Angeles, measured micro-plastics coming from 12 streams and rivers into the bay.

They also measured treated wastewater flowing from eight large wastewater treatment plants that represent 70% of the effluent that flows into the bay, including in San Jose, San Francisco and Oakland.

And they collected water samples at 17 sites in the bay, studied the digestive tracts of small fish, and measured micro-plastic accumulating in the mud on the bay floor.

The researchers will present their findings to scientists and public officials in Berkeley today.

“Plastic pollution is really pervasive,” said Sutton. “We use plastic in so many ways in our society. Our understanding of it and concern about it are rapidly evolving. But we have solutions we can implement to control this problem and keep our bay healthy.” 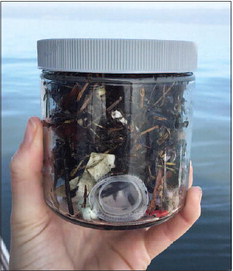 Plastic pollution is a growing problem in San Francisco Bay. Above is a water sample collected by scientists from the surface in the middle of the bay after a January 2018 storm.

Click here to see this page in the eEdition: